Welcome to my Cutco Knives review! If you are wondering is Cutco Knives a pyramid scheme, I'm here to help you find out!

First of all, congratulations on taking a second to do your research. It's the only way to avoid all the scams out there and to find opportunities that are proven to work.

The chances are that either yourself or someone you know has been approached about a job opportunity selling Cutco Knives or Cutco Cutlery.

Maybe you've even been to an interview. But something made you apprehensive. Maybe the fact that you were required to buy the knives to sell. Is this legit? Could this be a pyramid scheme?

Before we continue I want to be honest with you. I'm not affiliated with Cutco in any way or trying to sell you their products.

But my site is about creating income sources that can allow you to work on your own terms, so I do recommend products and services I've found useful myself. If you want to learn how I created two websites that create income on automation, check out my #1 recommendation below.

What Is Cutco Knives

Cutco Cutlery Corporation is an American company that manufactures and sells knives.

The company was founded in 1949 originally by Alcoa and Case Cutlery.

Cutco was originally the name of their main product but In 2009 the company changed its official name from Alcas to Cutco.

Cutco sells its products mainly through direct marketing to consumers and their products aren't available in most retail stores.

They have opened their own retail stores in six locations and they do sell their products through Amazon directly though.

CUTCO is best known for their high-quality knives with a lifetime guarantee and offering sales positions to students looking to make a supplemental income.

There were originally hundreds of individual CUTCO distributors. Vector Marketing was one of those.

Vector Marketing was originally an independent company that was founded in 1981 but they performed so well that CUTCO actually bought the company in 1985 to replicate the success across America.

Vector Marketing is located in Olean, New York but they have over 250 independently run locations all around the US, Canada, and Puerto Rico.

The also have additionally over 300 seasonal temporary locations that are open only for the peak summer season.

Vector Marketing sells over $200 million dollars worth of CUTCO products every year, so it's definitely not a small business.

Is Cutco Knives A Pyramid Scheme

No. Cutco knives doesn't seem to be a pyramid scheme in any way.

But in a pyramid scheme, there are either no real products being sold or the vast majority of revenue comes from the participation fees of the new recruits.

In a typical pyramid scheme you are required to buy either expensive training or make an investment of some sort for the opportunity to make money yourself.

The opportunity to make money actually comes from recruiting people under you.

Since pyramid schemes have a multi-level structure, they essentially shuttle money from the bottom of the pyramid to the top.

The people at the bottom of the pyramid always end up losing, because the system can't grow endlessly.

This is why pyramid schemes are illegal in most countries. They are a scam that gives people false hope and uses peoples' gullibility to transfer money to the top of the pyramid.

It's important to know that MLM, multi-level marketing, isn't the same as a pyramid scheme. Pyramid schemes use a similar model but in legit MLMs there products or services to sell and they are the main source of revenue.

Cutco Cutlery and its subsidiary Vector Marketing simply sell knives. Vector Marketing offers it's sales reps the opportunity to work as independent contractors selling knives, but the contractors can't recruit new reps directly like in an MLM business or a pyramid scheme.

Vector Marketing doesn't require it's reps to buy their own knife sets to sell or pay for training. It's in fact free to join, like it should be, so it can't really be a pyramid scheme for that reason as well.

So why are there so many reviews going around saying that Cutco and Vector Marketing are a pyramid scheme or a predatory scam?

Well the controversy seems to be mostly because of the way Vector Marketing has marketed it's sales rep positions. People have apparently thought they were going into a job interview, when in fact it was a interview for becoming an independent contractor. A key difference.

It's a fact that selling isn't for everyone. It's very hard to make a living as a direct sales representative if you don't have the necessary skills.

One of the things that has caused misunderstandings is also the training that Vector Marketing offers.

Many people feeli like they should get paid when being trained to a position. And this is true in most regular jobs.

But the key difference is that they are treating you as an independend contractor instead of an employee. So they do not pay for your training.

One of the things that has caused a lot of controversy is the fact that they offer these positions especially to students.

Many of these students don't really have the required sales skills and then feel pressured to sell the products to family and friends. Who buy out of pity.

This is not something Vector Marketing condones or recommends, but it's a sad reality with most direct selling positions.

There is also a common misunderstanding that you are required to buy your own supply of knives to get started with Cutco, but they actually loan you a CUTCO demonstration set.

All and all, selling CUTCO Cutlery as an sales rep through Vector Marketing is similar to any sales job or telemarketing for example.

It's easy to get in with zero experience, just like telemarketing, but it's actually hard work and requires certain skills to make sales. Many people are not cut out for it.

Just like with most telemarketing positions, they do offer a guaranteed base pay, but you have to make sales if you want to make meaningful income.

But if you are hardworking and have the correct mindset and skills, sales can be a very lucrative introductory job or even a career.

Is CUTCO A Scam FAQ:

There seem to be a lot of questions people are searching answers for about CUTCO, so I thought I'd answered the most frequent ones.

Q: Is CUTCO A Pyramid Scheme?

A: No. CUTCO is a manufacturer and seller of knives, they do direct marketing but don't have a multi-level structure

A: No. Vector Marketing is a subsidiary of CUTCO that recruits people as sales representatives to sell CUTCO products. There is no multi-level structure and it involves selling real tangible products so it doesn't match any definitions of a pyramid scheme.

A: No. CUTCO is no more a scam than any other company. Some people don't like their distribution method of direct selling but that doesn't make it a scam in any way or form.

A: In my opinion, not likely. You have to be comfortable and proficient in direct sales to succeed and enjoy the work. That said, you might be gifted in it and then you can probably make a lot better income than in most starting level positions. So it's a matter of individual skills and preference.

It all boils down into finding potential customers and closing deals. It means you have to be socially capable and you have to know how to handle no for an answer.

Thanks for reading and I hope you found my Cutco review useful. Cutco Knives definitely isn't a pyramid scheme.

Their marketing division Vector Marketing simply recruits people as individual sales reps that earn comissions out of their sales.

Since the reps can't recruit additional people, it cannot be a pyramid scheme and it's in fact not even an MLM.

The biggest controversy is the fact that they recruit students extensively as 85% of their sales reps are students.

Since many of these reps don't have what it takes to sell to strangers, they often end up selling to friends and relatives, who buy out of pity. This is one of the reasons that have given the company a bad rep.

If you want to find out if you have what it takes to be in direct consumer sales, CUTCO is probably as good of an opportunity as any.

I would personally recommend finding some form of regular job that pays the bills and investing your spare time in creating an online business.

If you are new to making money online, it's possible to earn an income on automation through content you've created online.

It's not a get-rich-quick type of deal, on the contrary. But it offers a legit and honest way to create supplemental passive income streams.

It's also possible to grow it into a full-time income source over time. How long that takes depends on your motivation, effort, time and a bit of luck.

If you want to learn how this stuff works, check out my #1 recommendation for learning these skills by clicking the button below.

If you want to get started right away I also created a free and very actionable course that will help you set up your website in less than a week. You can join it by leaving your email below:

You can enroll for the 7-day course by submitting your email address into the form below. I will not spam your email and you can unsubscribe anytime.

Thanks for reading and if you found this post useful, feel free to share it on social media!

Good afternoon. Excellent article. I currently own a set of Cutco knives, and I must say, they work like a dream. One of Cutco’s student reps sold them to me way back when, but before I agreed to purchase anything, I did extensive research on the product. I agree that Cutco isn’t a pyramid scheme, but they could greatly increase their credibility by hiring full-time workers, as opposed to students, to sell their products. You were very thorough in your analysis. God bless you!

Glad you found the article useful C.N.! I’m also happy that you’ve found the knives to be high quality. I also wonder if their distribution model of direct selling is more effective than selling online and through retail stores. I would guess this type of products would sell well through TV ads as well. But I bet they’ve done their research and found the model perfect for them. 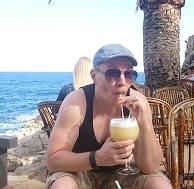 Hi! I’m Jukka. The founder of IHateWorking.net. This site is dedicated to helping people get out of the 9 to 5 rat race and start working for themselves, on their own terms. If I’m doing it, so can you! Read more about my story here. If you want to learn how to make an income online, go here.

Manage Cookie Consent
To provide the best experiences, we use technologies like cookies to store and/or access device information. Consenting to these technologies will allow us to process data such as browsing behavior or unique IDs on this site. Not consenting or withdrawing consent, may adversely affect certain features and functions.
Manage options Manage services Manage vendors Read more about these purposes
View preferences
{title} {title} {title}